Addicts and Basements (A Review)

Posted on December 17, 2014 by sundoglit
By Gabino Iglesias 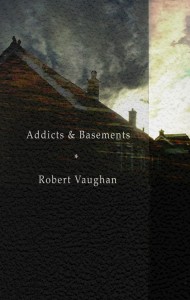 Robert Vaughan’s Addicts & Basements places the reader on shaky ground from the first page and relentlessly delivers short blasts of weird, dark, surprising, funny, and sad writing in order to keep her there. The collection, which dances between poetry, short fiction, and whatever lies in between those two, masterfully pulls strangeness out of ordinary things and offers a glimpse into the bizarre behaviors humans are capable of. From a woman mailing her pubic hair to her ex to a mysterious something that may or may not be hiding in a basement laundry room, the people, situations, and places in Vaughan’s work walk a fine line between normalcy and quiet chaos.

If a majority of poets have repeatedly made the mistake of working within the same self-imposed limits and themes instead of pushing them out and innovating, no one but themselves is to blame. Poetry can move in any direction it wants to and has the ability to draw into itself the best elements all other genres have to offer. And this last amalgamation is what Vaughan does in here; an amalgamation of the best parts of a plethora of genres that add up to a new, unique monster that is afraid of nothing. Vaughan pushes against normality, predetermined notions of the poetic, and the reader’s expectations with a power that makes all restrictions apparently acquire the consistency of wet tissue paper:

“Over breakfast this morning, Dana told me the hummingbirds represent the number eight, infinity. Their wings flapping so quickly they create this symbol. They dart, and dance and one even perched on an inert limb. I told her I’d heard a story once in which a hummingbird went crazy on an intruder. Within a second, poked both his eyes out.”

The poems and stories that make up Addicts & Basements inhabit that interstitial space between the everyday and the surreal, the anecdotal and whatever nightmares are made of. Each piece contains a full story, and they are all different from each other despite the fact that humor, strangeness, fear, and love, to name a few, act as cohesive elements that make it feel more like a full narrative made of many small pieces instead of a gathering of unrelated pieces.

While that cohesion and the author’s ability to hook the reader with a single line is impressive, what makes this one of the best poetry/short prose books I’ve read this year is Vaughan’s capacity for making the reader feel something. For example, when the writing is weird, the reader is forced to take notice and process the narrative. The same can be said for creepiness and hilarity (although there’s no run-of-the-mill humor here, more like a combination of gallows humor and the kind of bizarre storytelling that punches a chuckle out the reader because laughing is the only reaction that makes sense):

“Every once in a while, there’s a weird sound from the crawl space behind the stairs. It’s like a little moan. It almost sounds like a really faint “mommy!” I just bolt back upstairs whenever I hear it.”

Robert Vaughan achieved many things with Addicts & Basements, but the most important one, the most crucial achievement of this collection, is that it pulls those who are bored with the current poetic landscape into new territory and then, via superb writing that demands a reaction, reminds them that poetry can matter.

Gabino Iglesias is a writer, journalist, and book reviewer living in Austin, TX. He’s the author of Gutmouth (Eraserhead Press), Zero Saints (coming summer 2015 from Broken River Books) and a few other things no one will ever read. His reviews appear in places like Electric Literature, Verbicide, Entropy, The Lazy Fascist Review, Marginalia,The Rumpus, Out of the Gutter, Word Riot, and a other print and online venues.

1 Response to Addicts and Basements (A Review)