Blood by Shane McCrae (A Review)

Posted on June 12, 2013 by sundoglit
By Dianne Turgeon Richardson 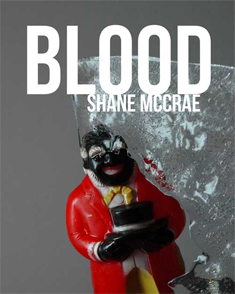 In case there is any ambiguity about what Shane McCrae is referring to in the title of his latest collection, it is quickly dispelled by “Heads,” the two-part poem that opens the collection, and its dominant image:  the heads of executed slaves displayed on pikes.  The poem serves as a warning.  In this stunning, gut-punching collection, Blood is violence of the most inhumane kind, but blood is also ancestry and family.  Drifting between those two poles is the question of identity, evident from the outset:

We niggers we    wanted to be exactly

what the white men thought we were

Kill them with that

and not with who we really were

These themes echo throughout the six sections of the book, presenting a selected history of the African-American experience.  “Heads” begins with the story of an 1811 slave revolt.  The first full section takes us into the mind of Margaret Garner, a slave who murders her children, many of whom were fathered by her plantation’s master.  Slavery has confused the speaker’s notions of love, mercy, and parenthood.  Identity is also murky in this section, which bears out in multiple poems about the naming of children.  For example, in “The Knife,” the speakers says of her daughter Mary, “Not Robert’s but    named after / Mary Robert’s mother / Not Robert’s but the Master’s / Who named a daughter Margaret Ann / And raped me Margaret / Garner whenever his wife got too / Pregnant[.]”

Naming and its relation to identity carries readers forward in time and into the second section, a single poem called “The Ballad of Cathay Williams William Cathay.”  This is the story of an African-American woman who joined the army in 1866 disguised as a man and who, in the poem, asks repeatedly, “How else I’m gonna know myself / When I am called[.]”

The poems in the third section are adapted from the slave narratives collected during the Federal Writers’ Project of the 1930s.  The first five poems provide accounts of Emancipation and the end of the Civil War.  A turn halfway through the section shifts the story to the rise of the Ku Klux Klan and the lynchings that characterize the Jim Crow era.  These are the bloodiest poems in the collection, with gang rapes, burnings, and stabbings.  In “The Crowd Shouted and Hollered,” the image of blood is literally and figuratively overwhelming:

only see the blood    could see

Yet in the midst of the violence and identity crises, McCrae attempts to give voice to the voiceless.  The collection begins with two epitaphs, the first from an editor at the Federal Writers’ Project.  The editor recommends to his writers “that the stories be told in the language of the ex-slave, without excessive editorializing….”  And in this bloody history, McCrae takes pains to follow that instruction.  Using a free-flowing form full of repetition and rhythmic stop-and-go, he mimics the phrases and cadences of slave speech as we know them.

The fourth section contains a single poem also inspired by the Federal Writers’ Project.  It serves as a transition from blood as violence to blood as familial relations, and within that context McCrae once again raises the issue of identity and the complications of mixed race and the act of choosing to be one race over another.  “The Last Letter I Got (W.L. Bost)” is a bridge into the fifth section, a multipart poem called “Brother.”  Here, a biracial speaker addresses his fully black half-brother and speaks of the black father he never knew.  This is a difficult section to read from a formal standpoint.  The rhythm is more erratic, the repetition more cumbersome.  Perhaps the confusion engendered in the reader mirrors the speaker’s own confusion regarding his history.  American history can be studied, researched, but personal history proves more difficult to navigate.  McCrae has been setting readers up for this part of the story the entire time.  All of the themes already encountered appear in this section:  blood, family lines, fatherhood, identity, and a perverted notion of love.

The collection closes with “After the Uprising,” which travels back to the slave revolt first introduced in “Heads.”  There is a sense of finality imparted by coming full circle, but one of hopelessness as well, a sense that we have not made as much progress as a nation as we think we have.  But that observation seems to come with an explanation:

Who do I got to kill

to get all the way free

And it was    more people than it was

alive in the world

The horrific images in this collection elicit a deep visceral reaction in the reader, a repugnance for the injustice suffered by so many.  The violence in these poems and the ongoing questions regarding blood force us to question the recent insistence that this is a “post-racial” nation.  There is a stark and unflinching honesty to McCrae’s poems, a refusal to shy away from the darkest stains on American history.  These are stories that demand to be told.

Dianne Turgeon Richardson is a native South Carolinian and MFA candidate at the University of Central Florida, where she is a managing editor of The Florida Review.  Her work has appeared in The Holler Box, Zaum 17, Blue Fish Digest and is forthcoming in Poem and the anthology A Sense of the Midlands.  She was a finalist in Jasper’s inaugural One Book, One Poem contest.  She blogs at anoveldianne.com, spends entirely too much time on social media, and is obsessed with college football.  She lives with her husband and two mutts in Orlando, Florida.  You can follow her on Twitter at @noveldianne.