Rontel by Sam Pink (A Review) 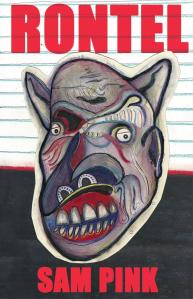 Much of the chatter I hear about modern fiction seems heavily focused on plot. I frequently hear that a story does not exist if something doesn’t happen that causes a character to change. I imagine that Samuel Beckett would argue with that premise. My reading of Rontel (Lazy Fascist Press, February 1, 2013) would indicate that Sam Pink (author of interesting works such as The No Hellos Diet, Hurt Others, I Am Going to Clone Myself Then Kill the Clone and Eat It, Frowns Need Friends Too, Person, and others) wouldn’t agree either.

By way of explanation, I would not say that Rontel seems to be particularly plot-focused. Nor does the narrator really seem to change. In the book, the unnamed narrator leaves his girlfriend’s place to attend his last day at work (he doesn’t end up going). Eventually he returns to his girlfriend’s place. Then him and his girlfriend go out for a while. Really, that’s about it. I always hate to give spoilers, but I don’t think this summary ruins the book for you in the slightest.

I say this because it wasn’t what happened during the book, or any change that it caused in the narrator, that interested me. I enjoyed reading, but what I enjoyed was the odd thoughts that came into the narrator’s head as he travelled and encountered people (the following section being from when the narrator read an item in a newspaper crime blotter):

The quote read: “Yeah this guy came up, and was going to give him (the victim) a hug, and then he (attacker) says, ‘Hey, what’s up’ and stabbed him in the back.”

So—someone randomly approached someone else outside a bar and said, “Hey what’s up,” then offered a hug, then stabbed the person as the hug was accepted.

I sat there terrified.

Why would anyone accept some random hug.

I’d never accepted a random hug in my life.

Who am I to deny.

I’d take the first one offered by anyone right now—even if I saw the person holding a giant knife behind his/her back.

Even if the person ended up stabbing me, I’d take a deep breath and put my mouth by his or her ear and say, “I knew you’d do this. I knew it, sweetheart. And, well I still thank you for the hug.”

Nowhere in the book does anyone try to stab the narrator. No one randomly tries to hug him either. The above passage foreshadows nothing and explains nothing. You can either enjoy how the narrator thinks or…well…nothing I guess.

To show that the above isn’t an isolated anomaly, let’s consider another section (which occurs when the narrator is asked to babysit his neighbor’s kid, though he doesn’t know his neighbor, and is eventually paid in pumpkin pie):

I imagined myself getting down onto the floor and saying to myself, “Hope nothing bad happens,” then the cat lifts the tarantula out of the cage and feeds it to the baby—lifting the tarantula from its cage, the cat walks over to the crib on his hind legs, blesses the baby with the spider then feeds the spider to the baby, whole, putting his paws over the baby’s mouth to make sure the spider is eaten.

This baby, cat, and tarantula do not feature in any of the book other than the babysitting scene. Nothing particularly eventful occurs during the sitting, other than perhaps the fact that the neighbor pays him in pumpkin pie when it is over. The narrator just thinks the above, and then moves on.

Given that the main movement of the book seemed to be these bizarre thoughts of the narrator and the odd interactions in which he engages (though I have to wonder if they are really that unusual or whether even I think things this strange without noticing), the question that must be asked is whether or not this can support an entire book. Some of the thought about contemporary fiction would apparently say no, but authors have proven before that it can work. If books could have actual opinions, I’m guessing that Beckett’s Malloy might dig Rontel but that Sparks’s The Notebook might get kind of pissed off.

For me, the narrator’s stream is more than adequate to hold up Rontel from beginning to end. At approximately 96 pages, it isn’t like the narrator has to prop up War and Peace. He’s funny, weird, and occasionally insightful. I still prefer Sam Pink’s earlier novel Person, but I had fun with Rontel and think that anyone who isn’t rigidly devoted to only plot-oriented fiction will as well.

David S. Atkinson received his MFA from the University of Nebraska. His writing appears in Grey Sparrow Journal, Interrobang?! Magazine, Atticus Review, and others. His novel in short story form, Bones Buried in the Dirt was published in January 2013 by River Otter Press. His writing website is http://davidsatkinsonwriting.com/ and he spends his non-literary time working as a patent attorney in Denver.

1 Response to Rontel by Sam Pink (A Review)